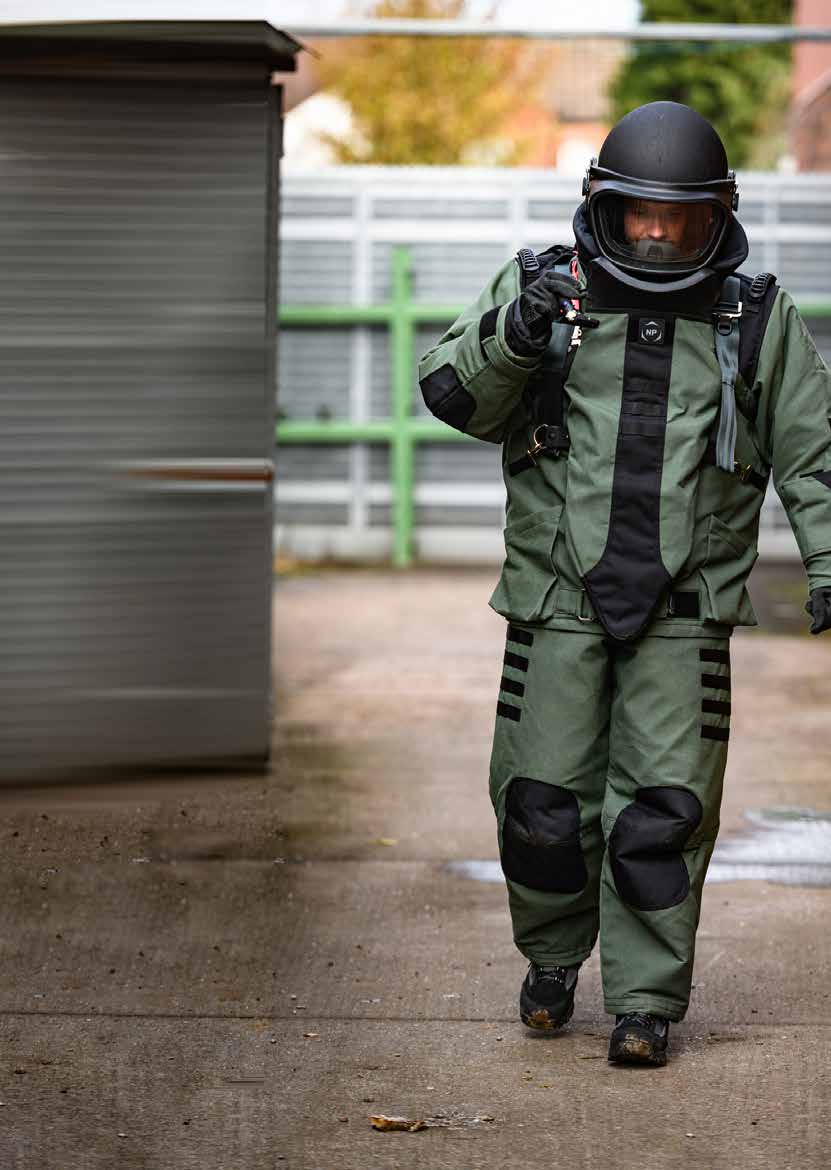 The bomb suit is a full body armor designed to protect bomb technicians during reconnaissance, disruption procedures, render safe, or disposal activities of potential or confirmed ordnance threats. The suit’s main parts are the trousers, the jacket, the breastplate, and the helmet. The breastplate, made of composite material, deflects blast waves away from the body and protects the torso and neck. The helmet offers ballistic protection against fragments and allows the technician good visibility while operating.

The bomb disposal suit protects the technician in several ways, from fragmentation and blast overpressure, spine and head impact, to heat and flame.

Among the dangers technicians encounter in the line of duty are:

Bomb suits can also include chemical, biological, radiological, and nuclear (CBRN) compatibility to account for the increased threats.

In 2006, to create a standard in performance and protection capabilities, the United States National Institute of Justice (NIJ) supported a program to develop a national testing standard for EOD suits similar to the NIJ standards used in the industry to test body armors and ballistic protection. As a result of those consultations and testings, the NIJ released in 2016 the NIJ 0117.01 or Public Safety Bomb Suit Standard addressing the minimum standards to be achieved for certification of EOD suits.

The Public Safety Bomb Suit Standard covers a wide range of requirements from:

EOD suits have evolved rapidly. From the first technician in the United Kingdom having to defuse unexploded bombs and other ordnance without wearing any protection to the first suits, the equivalent of current ballistic protection, made of Kevlar and including armor plates without efficiently protecting bomb disposal specialists from blast or impact. More recently, the movie The Hurt Locker (2008) brought the focus on EOD while highlighting some of the challenges associated with bomb disposal and bomb suits.

NP Aerospace, a world leader in advanced low weight, high-performance armor systems, today rightfully prolongs the British expertise and legacy in Explosive Ordnance Disposal. Its 4030 Elite Bomb Disposal Suit & Helmet System revolutionizes the EOD landscape, allowing EOD technicians to Don and Doff its suit without assistance. The suit can be donned like a jacket and the helmet put on like a motorcycle helmet. The suit’s enhanced ergonomics allow technicians a wider range of movement with patented articulating frontal plate and cutting-edge technology significantly improving weight distribution and reducing common technicians’ issues such as fatigue and heat stress, thus increasing their safety by allowing them to retain their ability to accomplish their task.

Unifire’s mission is to produce and provide military, fire, rescue, and law enforcement with the products and knowledge required to fulfill their unique duties.